“If the guys behind Airplane! and The Naked Gun tried to make a movie in the style of Ed Wood, it might look something like Inhumanwich!… an impressively spot-on spoof.” – Mike McGranaghan, The Aisle Seat

“You can tell the people making it are just having the time of their lives… I had to pause the movie TWICE because I was laughing so hard.” – Peggy Christie, Cinema Head Cheese

“[An] utterly bonkers labor of love… a must see for fans of the 50s genre – and an absolute blast.” – Dead Celluloid

“1950’s monster movie tropes turned on their head and used as a pogo stick… a worthwhile throwback parody that should whet the appetite of fans of similar films such as The Lost Skeleton of Cadavra.” – Scott Foy, Dread Central

“I loved this movie… it just brings a smile to my face that this kind of thing exists.” – Zach Bender, Dumpster Drive-In

“A loving homage shot through with an undercurrent of MST3K-style mockery… one of the most ridiculous monsters in movie history.” – Nick Rocco Scalia, Film Threat

“A great throwback to the monster movies of the era… funny and entertaining.” – Adam Cook, Guilty Pleasure Cinema Review

“Everything that I’m looking for in an indie flick… I f-ing love it.” – Horror Society

“Fun and spirited… a black-and-white nostalgia trip with just a touch of modern flair and a whole lot of what makes old school low budget sci-fi so much fun.” – Mike Stec, The Movie Sleuth

“Good Lord, deliver us from laughing ourselves to death… you just cannot help but laugh, and laugh, and laugh at the sheer, brainless madness of it all.” – Kirk S. Fernwood, One Film Fan

“Plenty of camp and humour… leaves me hungry for more.” – Ed Sum, Otaku no Culture

“A tribute to schlock of the ’50s, not a callow put-down… just the brand of inspired nonsense we need.” – Rob Gonsalves, Rob’s Movie Vault

“Jam-packed with hilarious horseplay and is to be entirely savoured with each viewing.” – Sooz Webb, The Slaughtered Bird

“An utterly, utterly ridiculous film… resulting in a tone of stoic hilarity that perfectly replicates the feel of the films that inspired it.” – Andrew Marshall, Starburst

“One of the funniest films I’ve watched in a long while… a fun, twisted take on an old sci-fi trope.” – Bob Ferreira, WeLoveHorrorMovies 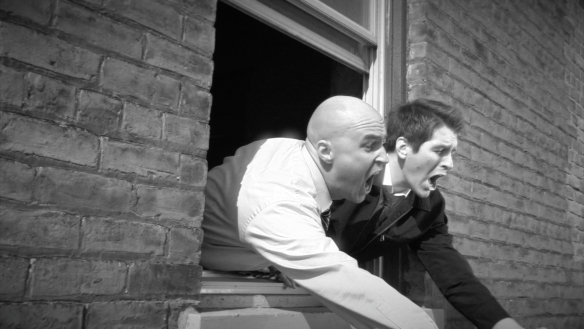 Critics! To request a review copy of Inhumanwich!, email us at inhumanwich(at)gmail.com, or use the contact form here.